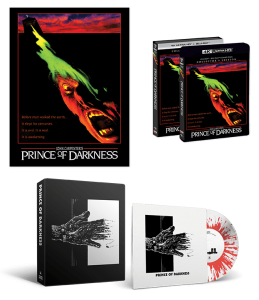 John Carpenter’s Satanic masterpiece PRINCE OF DARKNESS is headed to 4K Blu-ray from Shout! Factory/Scream Factory January 21, 2021 complete with a new audio mix and an exclusive 7″ record from Carpenter, his son Cody, and Daniel Davies. You also get an 18×24″ rolled poster. This release ports forward all previous Shout! special features, including interviews I did with Carpenter and Alice Cooper for Red Shirt Pictures. A standard 4K disc is also going to be available minus the poster and vinyl. You can pre-order now at ShoutFactory.com.