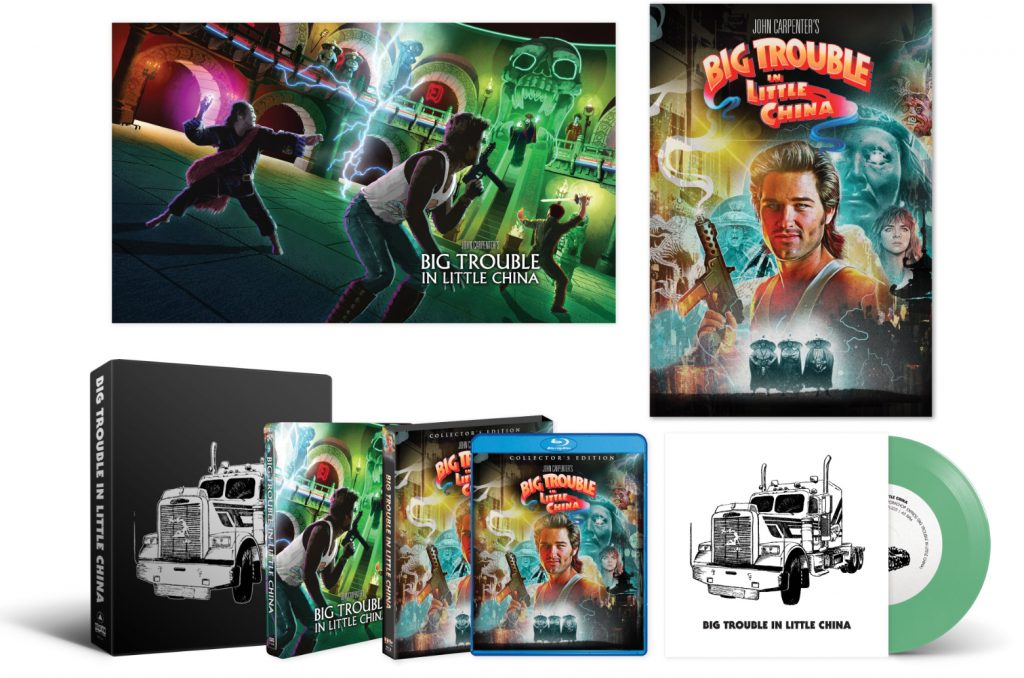 Reverend Entertainment is proud to be producing the special features for Scream Factory’s upcoming BIG TROUBLE IN LITTLE CHINA Blu-ray, and the options on this one are outstanding. Pre-orders are open now for all sets outlined below over at ShoutFactory.com. Special features will be announced soon.

For the first time ever, Scream Factory is bringing a classic Carpenter film to fans as a Steelbook and a Collector’s Edition at the same time! The deluxe, limited edition box sets will include a 7″ of newly recorded music from BIG TROUBLE IN LITTLE CHINA via Sacred Bones. The A-side is the 2017 version of the main theme, “Porkchop Express (Big Trouble in Little China),” and the B-side contains a never-before-released recording of “The Alley War,” composed by John Carpenter and recorded by John, Cody Carpenter, and Daniel Davies earlier this year. Our green vinyl variant is a limited edition of 2,500 copies and is housed in a lavish slipcase with new art by frequent Carpenter collaborator Chris Bilheimer.

Kurt Russell stars as Jack Burton, a tough-talking truck driver whose life goes into a supernatural tailspin when his best friend’s fiancée is kidnapped. Jack suddenly finds himself in a murky, danger-filled world beneath San Francisco’s Chinatown, where Lo Pan, a 2,000-year-old magician, mercilessly rules an empire of spirits. Facing down a host of unearthly terrors, Jack battles through Lo Pan’s dark domain in a full-throttle, action-riddled ride to rescue the girl. Also starring James Hong, Kim Cattrall and Dennis Dun, this special effects-filled spectacle is a non-stop thrill ride to an incredible finish!

There are five different offers, and you know what ‘ol Jack Burton always says at a time like this, so click here to order yours today!